Glimpses of the city centers of yesteryear: the antiques of Yenke Peddler

The top lot of the sale was this rare historic “Tippecanoe” – “North Bend” cabin bottle, likely Mount Vernon Glass Works, Vernon, NY, circa 1840, which fetched $47,970, near the top of its estimate.

WOODSTOCK VALLEY, CONN. – Norman Heckler showcased more than 70 prime examples of glass bottles at his company’s Premier Auction 210, an online sale that ran Aug. 17-31. The sale totaled $472,680 with just two lots passed and between 150 and 200 registered bidders participating on Heckler’s own platform.

Among the famous classics and new discoveries was a historic Masonic hourglass-shaped vial that sold for $19,890 to a private collector. Probably from Coventry Glass Works, Coventry, Conn., 1815-1830, the half-pint GIV-29 bottle featured a light olive yellow coloration, a sheared mouth and a pontil scar. Its bright, clear color, heavy embossing, and extremely rare and fine condition made it very desirable. These were the former McBaron Collection and the Jay and Maxine Jacobs Collection, West Coast collectors who have been acquiring rare and desirable bottles for decades.

According to the Virtual Museum of Historical Bottles and Glass, the first American Mason Lodge was established in Philadelphia in 1730, and future revolutionary leader Benjamin Franklin was a founding member. George Washington joined Freemasonry in the lodge in Fredericksburg, Virginia when he was 20 years old.

Most Masonic flasks were made between the 1810s and 1830s in the United States when American Freemasonry, considered both a fraternal and patriotic organization, was at its zenith. During this period, it was not uncommon for Masonic lodges to meet in local taverns or in halls hired for the occasion. After the meeting, the brethren usually met for a “festive council” or collation, during which toasts were offered and libations consumed. As likely as not, Masonic flasks came into use around this time and some of these examples could have been on tables, full of spirits to stimulate dialogue, conversation and fellowship. 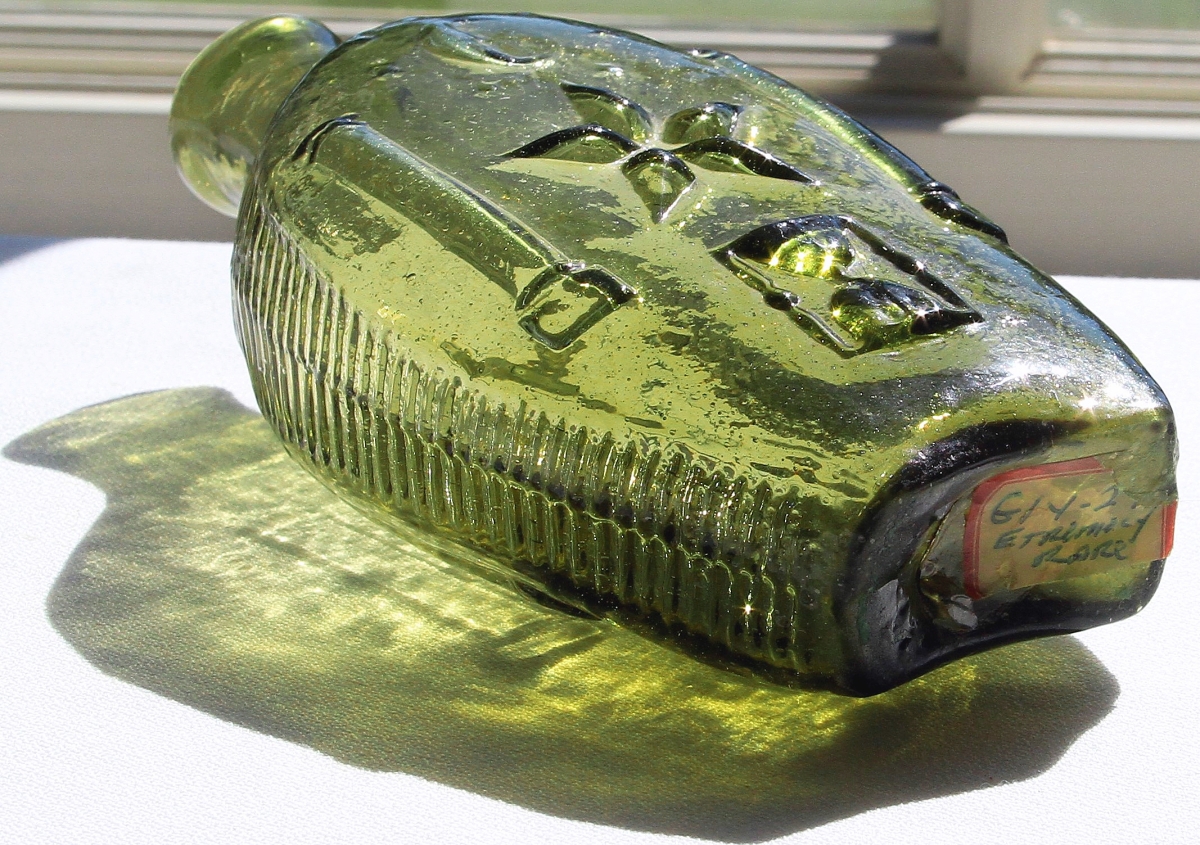 This historic Masonic hourglass-shaped flask, which sold for $19,890, probably came from Coventry Glass Works, Coventry, Conn., 1815-1830. The half-pint GIV-29 bottle exhibited a light olive yellow coloring and extremely rare strong embossing. Ex McBaron Collection and Jay and Maxine Jacobs Collection, it was one of the Masonic flasks mostly made between the 1810s and 1830s in the United States at the height of American Freemasonry.

The top lot of the sale was a figurative example, a historic “Tippencanoe” – “North Bend” cabin bottle, probably Mount Vernon Glass Works, Vernon, NY, circa 1840, which fetched $47,970, near the top of its estimate, going to a west coast collector. Log cabin shaped, medium to dark forest green, the pint-plus bottle featured an applied slant-neck mouth with ring, tubular pontil scar, and a 1/8-inch hole in one corner of the base. GVII-1, it has been described as “historically significant and impressive”, one of the few known examples.

Rara Avis, a batch that was not a bottle but a three-mold blown bowl, fetched $33,930. It was a bright yellow green with an outward machined rim, made by Kent Glass Works, Portage County, Ohio, 1825-1835. At 2-7/8 inches high and 8 inches in diameter, it was in good condition. Heckler said there could only be three known examples.

“EG Booz’s Old Cabin Whiskey” was made for Edmund G. Booz by the Whitney Glass Works of Glassboro, NJ, circa 1860-70. At his death, Booz is said to have had 25 cases of Cabin Whiskey in stock, worth $6 a case or 50 cents a bottle, and the famous bottle has been widely reproduced. At 2022 auction prices, this cabin-shaped bottle of amber, with an applied angled-neck mouth and smooth base fetched $31,590. It was 7½ inches tall and retained about 75% of its original wrapper around the label, which Heckler says is “where rare bottles and ephemera meet.” It was the old Robert Heath collection, the Jay and Maxine Jacobs collection.

Washington-Eagle portrait bottles continue to show market strength, with an example probably by Bridgeton Glass works, Bridgeton, NJ, 1836-55, selling at $21,060, more than triple its high estimate. The lime-green bottle had an overall olive tone with what the catalog described as “severe citron influence”, resulting in a rare color. It was discovered a few years ago in a ship’s captain in Nantucket. Beautiful extremely rare color. 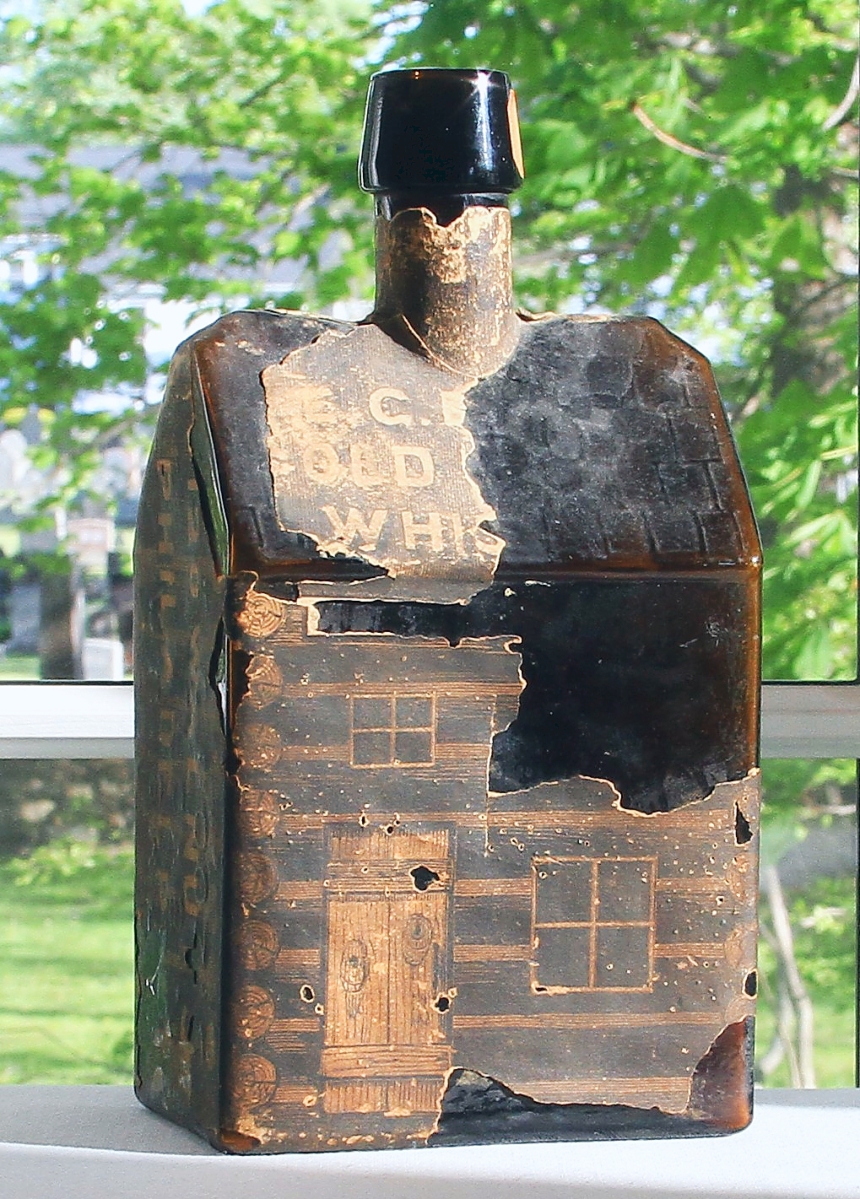 “EG Booz’s Old Cabin Whiskey” was made for Edmund G. Booz by the Whitney Glass Works of Glassboro, NJ, circa 1860-70. This cabin-shaped amber bottle, with an applied angled-neck mouth and smooth base, fetched $31,590.

“Success to the Railroad” proclaimed historic flask by the Lancaster Glass Works, Lancaster, NY, 1849-60. Formerly in the collection of Judge Ed Mackenzie and the Jay and Maxine Jacobs collection, the pint bottle was sapphire blue, with an inwardly rolled mouth and a tubular pontil scar, earning $17,550, an estimate more than twice as high.

For $11,115 there was another historic Masonic flask, this one a “JKB” Masonic Eagle made by Keene Marlboro Street Glassworks, Keene, NH, 1815-30. With heavy embossing and a rare Prussian blue color, it belonged to the Jay and Maxine Jacobs collection.

Representing just a good old American cylindrical bottle, an “Old Virginia Peach Brandy” bottle, 1845-60, had recently been found in New Jersey. It was dandelion honey yellow with olive undertones, with an applied slant neck mouth with an iron ring and pontil mark, measuring 12½ inches high. Its fine condition brought it to $10,530, an estimate twice as high.

Other notable Eagle flasks included a “New London Glass Works” Eagle quart and historic anchor flask, New London, Conn., 1860-66, yellow with acacia honey tone, applied double neck mouth and a smooth base from the Jay and Maxine Jacobs collection, which edged closer to its high estimate at $9,945; a rare historical half pint Double Eagle flask, Coventry Glass Works, Coventry, Connecticut, 1830-48, in a bright lime/light lime green, possibly one of three known and discovered several years ago at a Connecticut flea market, which was bid twice its high estimate at $8,190; and from the Midwest, a historic Double Eagle pint bottle, 1830-1860, in deep aquamarine, which left the gallery at $4,680. Ex Paul Richards collection and Jay and Maxine Jacobs collection, it was extremely rare with three or four known examples. 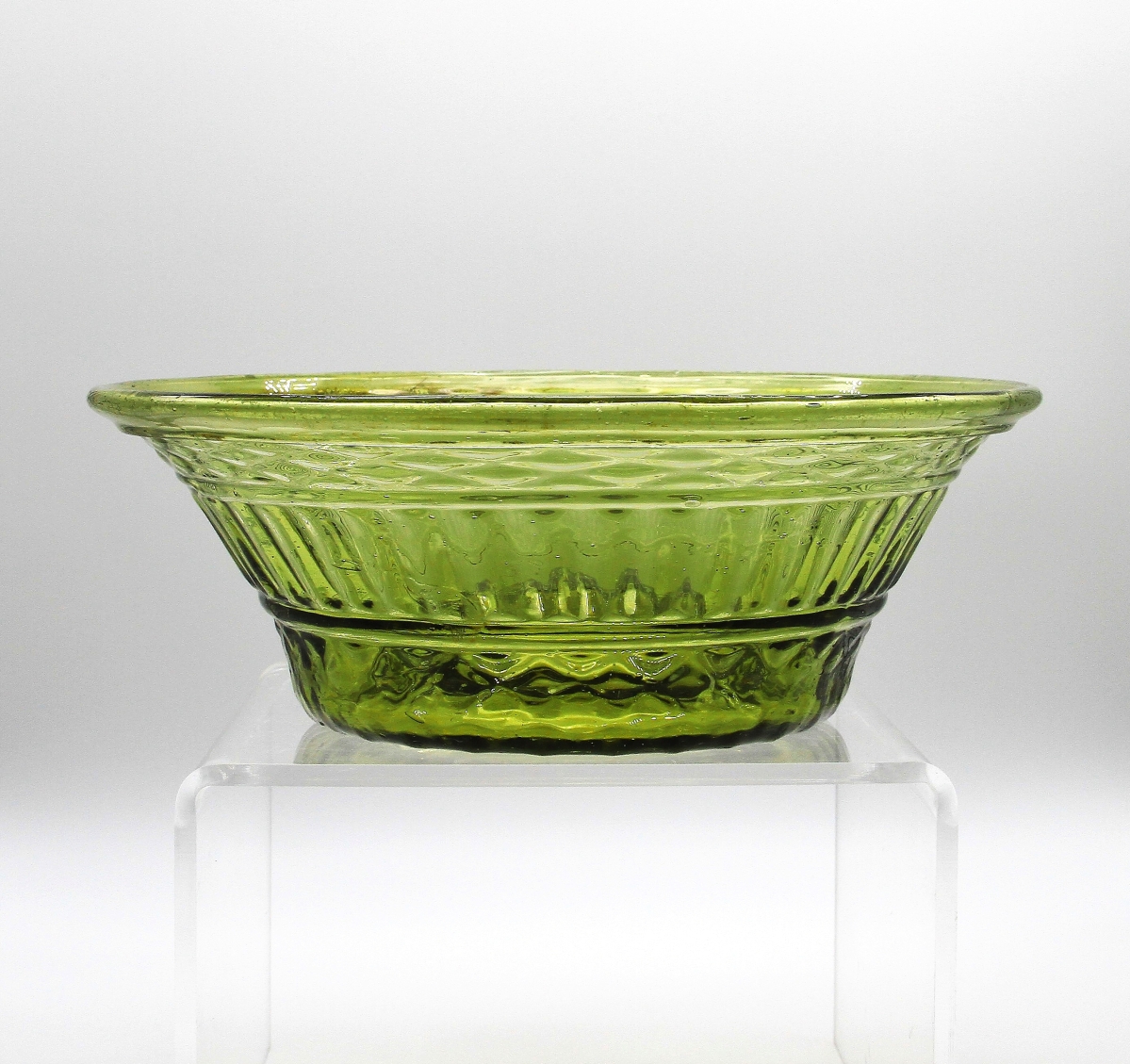 A three-mold soufflé bowl fetched $33,930. It was a bright yellow green with an outward machined rim, made by Kent Glass Works, Portage County, Ohio, 1825-1835. There are possibly only three known examples, according to Norman Heckler.

Two scrolling flasks were among the highlights. One with an anchor roller and fleur-de-lys flask, possibly made by John Robinson and Son Manufacturers, Pittsburgh, Penn., 1830-1834, was ice blue and sold for $8,190. The other was an American example, 1845-60, moonstone with a pink cast, a rare and unusual color. It made $4,095 and was one of Heckler’s favorite items in the sale, comparing its pearly white color to the clambroth glass typically associated with Cape Cod glass.

Another recent discovery came in the form of “Dr JB Henion’s Sure Cure For Malaria”, a brilliant sapphire blue medicine bottle, circa 1885, with a large applied “mushroom” mouth and smooth base. Standing 5½ inches tall, it had recently been unearthed in Connecticut and fetched $5,850.

The prices shown include the buyer’s commission as quoted by the auction house. For information, www.hecklerauction.com or 860-974-1634.